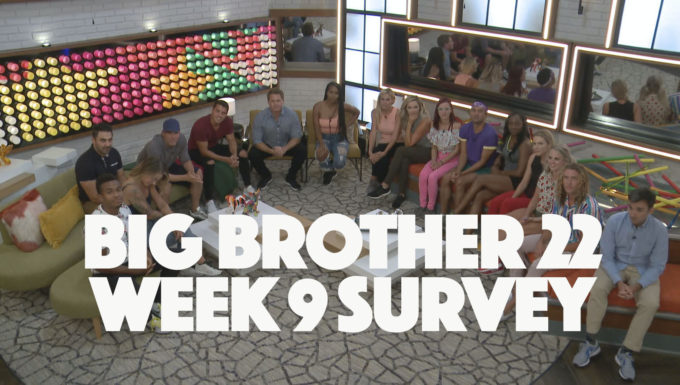 The Big Brother 22 Week 9 survey results are in. For the most part, there weren’t that many changes. Let’s take a look.

For who is playing the best game, it was Cody who took back the No. 1 spot from Enzo. I’m guessing that Enzo not voting Nicole out when he had the chance has a lot to do with that. Tyler holds onto the No. 3 spot while Memphis maintains the fourth. Christmas dropped to last, just below Nicole.

Onto the favorite houseguest poll. This is definitely intended to be different than the America’s Favorite poll, and surprisingly the outcome has been different each time now. Janelle holds onto the top spot and Tyler keeps his spot just below her. Holding onto the No. 3 spot is Da’Vonne. Enzo moves up to fourth, pushing Kaysar down to round out the Top 5. Nicole F is slowing climbing out of the bottom, but Memphis holds onto the dead last, least popular spot. Christmas is quickly falling though.

And now for the big one. Who would win America’s Favorite Houseguest if it were to be held today. This one got a little tricky this week, because there were some suspicious voting patterns that would suggest some people were voting for Tyler multiple times. That is a terrible thing to do in a poll like this because you aren’t trying to win this poll for your favorite player; you’re trying to see how close this vote is. So that was a terrible disservice to Tyler. That being said, the change wasn’t drastic. It just helped move Tyler up from No. 3 to No. 2. But Da’Vonne, for the second week in a row, comes out on top. Janelle goes from No. 2 to No. 3, but I question that vote. Next week there will be a more secure method so there won’t be any funny business. Enzo and Cody round out the Top 5, which in find a bit odd also. How has Cody moved up past Kaysar and Ian? Recency bias, is the only thing I can assume, meaning he’s still in the game and they’re not. One thing is for certain, though, and that’s Memphis is definitely not winning this. He has been at the very bottom of all popularity and AFHG polls for most of this season.

And as for the season as a whole, It’s still right around the middle of the road for the majority of people. It has averaged 2.5 the past three weeks.

Be sure to check out the full graphic below to see where your favorites and least favorites rank. 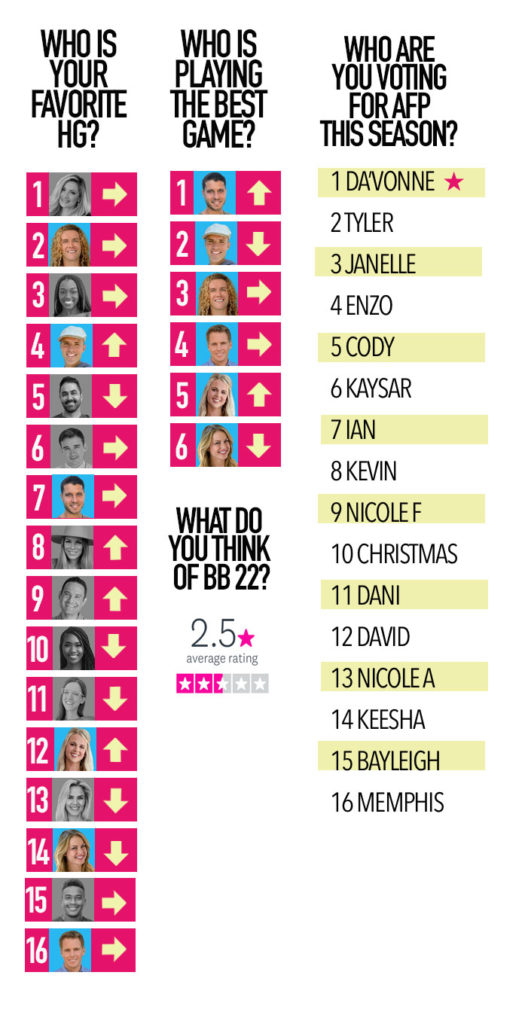