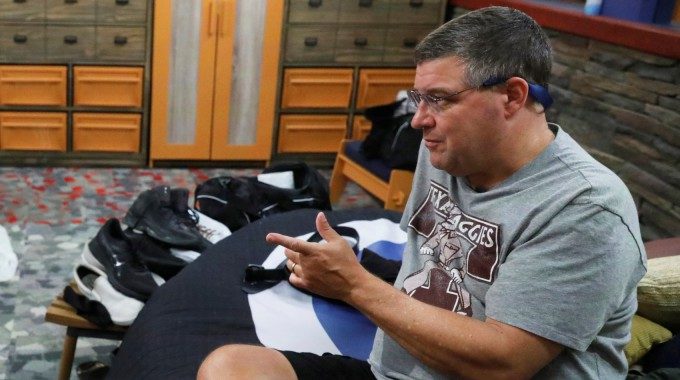 Oh, the week that could have been this round on Big Brother 21. Cliff Hogg bested the odds and won his way back from Camp Comeback to move on that night and secure the HOH before he lit a fuse against the Shooters when he nominated Jack and Jackson. Well this has got to turn out great, right? Ehhh…

From where the week started the possibilities were set high as we saw a chance for the game to break open after three rounds of Gr8ful and the Six Shooters holding all the power. Gr8ful had won all three of the first HOHs and both the remaining Camp powers while their ancillary allies Sam and Kat had secured the Vetos giving them what they wanted each step of the way. Finally! A chance to take the game in a new direction. Then it started to fall apart.

With Jack and Jackson on the Block the Veto draw wasn’t the best for the bros and company so Jack activated his do-over power and that came up flat with basically the same draw again. Here was the opportunity yet again for the underdogs to strike another win.

With the vote count so closely balanced, this comp was critical not just to keep a target on the Block but to make sure the Unders could have the deciding vote. It wasn’t meant to be. Someone was “manifesting” against our hopes for some action. Cut it out, Christie.

Jackson won the Veto which opened the opportunity for Christie to use her Chaos power. This one would upgrade a Veto to Diamond status, allowing the holder to not only save a nom but to name the renom. Catch was the control went to the Veto holder, not Christie, so she’d have to use it in conjunction with an ally winning the Veto. The stars were starting to align for the Shooters again.

Christie could use her power to make sure Cliff didn’t renom her or Tommy (or Holly, Analyse, any Shooter basically) and thereby keeping the voting control in their hands. One of the Shooters on the Block would leave five of the ten votes plus Kat to give them the controlling majority. But First wait, there’s more.

Now here’s where Cliff flopped. He performed impressively in the Veto comp and had a respectable showing there but it wasn’t enough and no one else pulled through, not even the Veto King, Sam. So now he could force Christie to use her power to get what she wanted since he wouldn’t have the numbers after that to salvage his plans to evict Jack. For some reason, however, Cliff folded to the mere suggestion of doing Christie a solid and letting her keep her power. Wait, what?

Sure, Cliff wouldn’t be able to evict this target but instead of forcing Christie to burn her power to get her way he simply did the renom for her. As Nick argued with Cliff ahead of Monday’s Veto meeting we heard Cliff suggest he believes Christie would use her power to help him next week. Cliff thinks he’s getting in good with the Shooters. Wrong. After the Veto Meeting Cliff questioned aloud why no one was asking him anything anymore. Because they were done with you, buddy. Used and tossed out.

Now Christie rolls into the next two weeks with her power in her pocket, Bella gone, and the Shooters’ numbers advantage stronger than ever. No chance for a tie next week and even if they lose this next HOH, as long as not more than one Shooter is on the Block, they’ll have control of the votes.

It’s a mess. Cliff screwed up. He is the HOH and the renom was his call so this one is squarely on him. We desperately need a power shift in this game and his HOH win couldn’t even deliver that. Had the power not been there then we’d see a different play here but that’s the lay of the land this week and you roll with the punches. Cliff decided to lay down with the punches instead. Blerg.

Scooby-Doo Ending Redo Scenario: The most magical ending to the week would have been Cliff lying to Christie, promising to renom her target for her, then blindsiding Christie as the renom leaving her and Jack as the final noms. Yes, that would have been a wild and memorable outcome. Cliff was too afraid to make such a big move, but even the far more reasonable approach of “if you want Bella up then use your power and do it yourself” would have been a solid exit to the week.

Tonight launches a new week and new opportunity but as noted above, the odds are only improving for the overgrown alliance. An Endurance HOH Comp awaits us tonight and we need a shakeup in the cards or this is going to get even more painful. Hang on and cross all your fingers.