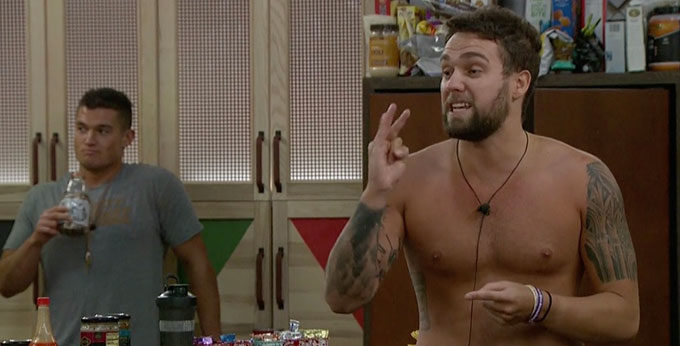 It’s Christie or Analyse leaving the Big Brother 21 house, and after a week filled with drama, it looks like the votes are already settled.

Update: But wait! There’s a big potential shift as of this afternoon. Could Christie pull off the vote flip with the help of a few new allies? Since this published earlier, Jackson and Holly have decided it might be better for Christie to stay. With Holly, Jessica and Cliff’s votes (who we are pretty sure they have), Christie will stay over Analyse, potentially blindsiding her, Nick and Tommy even.

Christie went up as Jackson’s target this week, and Analyse was right beside her because she would be a definite vote for Christie to stay. After the Power of Veto kept nominations the same, Christie got to work on her campaign to stay. And since she had nothing to say about Analyse, she decided her only angle was to expose Nick. No one is sure how she expected that to get her any votes to stay. If anything, it had the opposite effect, as I think it took away one of her two only votes – Tommy.

After the Taco Tuesday fight, Tommy said it’s clear what his vote will be this week. He is aware that Christie’s game is over, and a vote from him will do no good. Jessica, however, will probably still vote for Christie to stay, just because she doesn’t really understand Big Brother. But as of now, it’s starting to look like a house vote is coming up on Thursday. But let’s take a look at how the votes would play out based on what the nominees have been told so far.

So as math would have it, Christie is out. But like I already mentioned, Tommy’s vote is likely to change so that he won’t have that looming over him, and since the only person left for him to completely rely on will be Analyse (poor Tommy), so voting against her is not in his best interest. And it’s possible Jessica will follow suit and it will be a unanimous vote against Christie. But I think we can expect a pity vote from Jessica. She’s really Team Christie for some reason.

Who do you think will be evicted from the Big Brother house Thursday night? Let us know in the poll below.